With Julen Aguinagalde’s deciding seven-metre throw in the shootout of the VELUX EHF FINAL4 last Sunday the European club season 2015/16 has ended.

Although handball fans have to wait almost 100 days for the next European Cup match action, preparations for the new season have already started deep into the last edition. Regulations have been released, playing systems confirmed and important dates set.

Creation of the starting roster

Member federations of the EHF have to register their clubs eligible to take part in the European top flight by Tuesday 7 June.

The VELUX EHF Champions League 2016/17 will be played in the same mode as this season with 28 teams.

The procedure for the awarding of additional places will also remain unchanged and each federation will have the right to ask for an upgrade of its EHF Cup club to the EHF Champions League.

Already before the 2015/16 season the EHF has approved a list of criteria that will be used as a tool to define on the one hand the awarding of upgrades for those federations who will ask for it and on the other hand for the decision regarding the distribution of teams into groups A or B (8 teams each) respectively C or D (6 teams each).

Based on these criteria the EHF Executive Committee meeting in Vienna on Friday, 24 June will decide all upgrades requests and confirm 16 teams for groups A and B and remaining teams for groups C and D and for qualification tournament(s), whose winner(s) will join the group phase in C and/or D in the VELUX EHF Champions League.

Just seven days later the focus of all Champions League fans will shift to SELECT headquarters in Glostrup, Denmark, which will host the qualification and group phase draw (1 July 2016, 13:00 hrs). 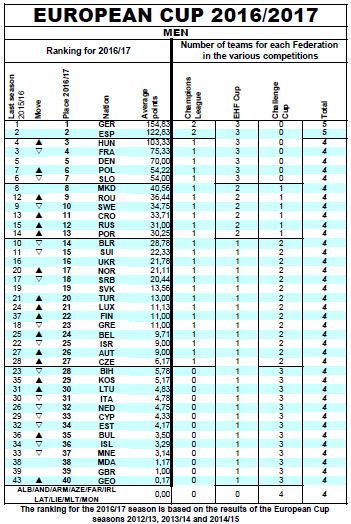 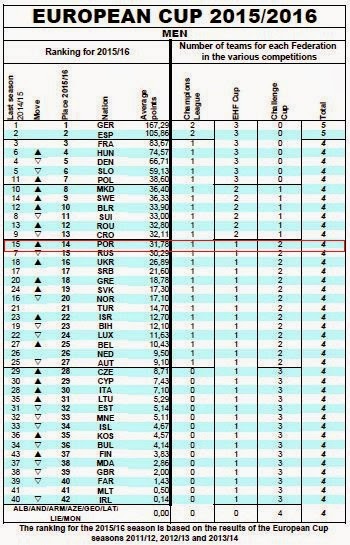